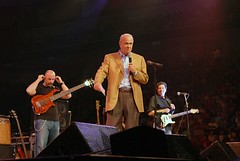 Fred Thompson is set to announce on September 6 and I’ve been waiting for the day for a while. Thompson is the best chance for a true Republican to win the nomination and the presidency. I don’t agree with him on everything (I think I’m the only one who agrees with me on everything) but to me he’s the obvious choice.

He has a strong record as a US Senator, he’s plain spoken and relates well to the people, and most of all he’s a bit of a maverick — he’s not afraid to take stances not fully in lock-step with the party or any particular special interest. There is no other candidate running for the GOP nomination more clearly ready to take on the mantle of Reagan and lead the party back.

I’ll let him speak for himself!…