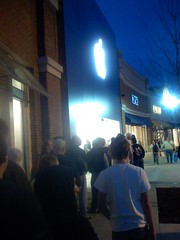 Leopard Debut Line
This past Friday afternoon the boy and I hopped in the car and we drove down to the brand new Apple Store in Deer Park so that I could pick up the latest version of the Macintosh operating system dubbed Mac OS X Leopard (that would be “oh es ten Leopard” for the uninitiated).

The debut was set for 6 PM and we arrived at about 5:45 at which point the line was I’d say about 100 people long stretching all the way south from the store and just ready to curve around the corner. What was strange for me was the collection of different types of people that were there for the debut. Most of the time you would think that people waiting in line for the debut of a computer operating system would be mostly a collection of geeks like me. This was simply surreal. You had everything from Yuppies with their mochas to some kids from Stevenson High School. You had families as well, I had my son and the man behind me had a couple of his young kids with him. The folks in the line were as random a cross-section of people as you would expect just about anywhere else.

The doors opened up at 6 and the line moved really fast. We snagged our free Leopard t-shirts at the door and I got in line to pick up a copy while Aidan went and picked out his game as a reward for being good at school this week (Zoo Tycoon 2 by the way). The line at the counter went pretty fast and while waiting it was real tough to decide which version to get. No, this isn’t like Microsoft with 10 different versions with different features crippled in the OS. The decision for me was whether to get a single edition or a family pack (since we now have 3 Macs in the house) which allows you to install Leopard on up to 5 Macs in your home (what a novel concept).

At this point I was bitten by some of my old Windows habits. Before getting my first iPod and then shortly thereafter becoming a Mac enthusiast I was a major Windows geek and had hand-built my previous 5 PCs. Every Windows user knows, it was trumpeted from the heights when Vista came out, an upgrade to Windows usually means you have to upgrade your PC otherwise it will likely run slower before because that much more as been added to the OS. This has been the case for every Windows upgrade I’ve ever done. So although I did the Tiger upgrade before on my Mac that was just my Mac. Now I have to worry about my mom’s iMac and my son’s iBook. I was concerned it would run slower than Tiger and whether they really needed the upgrade or not. So, I got the single version and I get an education discount from Apple since I’m on the school board (one of the few forms of “compensation” I get for the many hours I put in there!). 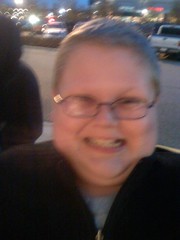 Aidan entertains dad and the line.
So with Leopard and Zoo Tycoon 2 in hand we returned home and I immediately cracked open the package to start the installation on my year and a half old MacBook Pro — the first Mac to transition to Intel. Then the shockers began. First, the upgrade took about 45 minutes. In that time Leopard backed up my Tiger system so I could revert if need be and did the Leopard install, all behind the scenes since I just went with the express installation route. Then I fired it up and the true shocker ensued, everything runs faster. I mean it, I’m no sucker for these upgrades where your mind tricks you into thinking things run faster. I’m telling you everything from boot to opening Safari or Mail or any other task I’ve done thousands of times on Tiger runs faster. The system just pops, it is definitely noticeable. The final shocker — everything worked. I had a program or two that had to be updated but no searching for drivers or changing this or that to get it to work everything worked perfectly and I was doing one of my online singing gigs within an hour after doing the install.

There has been all of two snags that I have hit, the first being Apple has changed how the system accesses the hard drive that is connected to my Airport Extreme Base Station router. It’s no longer using the Airport Disk utility which is a good idea. What’s not a good idea is it doesn’t automatically mount the drive anymore, a few folks have complained about this in the Apple forums so I know it’s not just me. I’m sure they will come out with a fix for that shortly.

The other is with my M-Audio Firewire 410 audio interface and yet another case of it needing retirement. I’ve been getting some audio bugs and I’m sure they haven’t put out a driver for Leopard yet although M-Audio has announced they will. To be honest this is M-Audio’s problem as this driver has always been buggy and a pain. I like its features but I’m at wit’s end with it, I see a Presonus device replacing it in the near future.

So my decision in the line to just get a single version ended up costing me about $60 or so since it’s clear to me I can immediately put Leopard on my other Macs with no worries. I’ll try to purge the Windows habits for good when the next version of OS X comes out. Kudos to Apple for another great release, I love many of the new features (hooray for Stacks!!!) and am looking forward to discovering them all.

Think The Cubs Got A Right Fielder?

Yes, it’s time to worry now and no, I’m not happy with how Lilly pitched last night.…